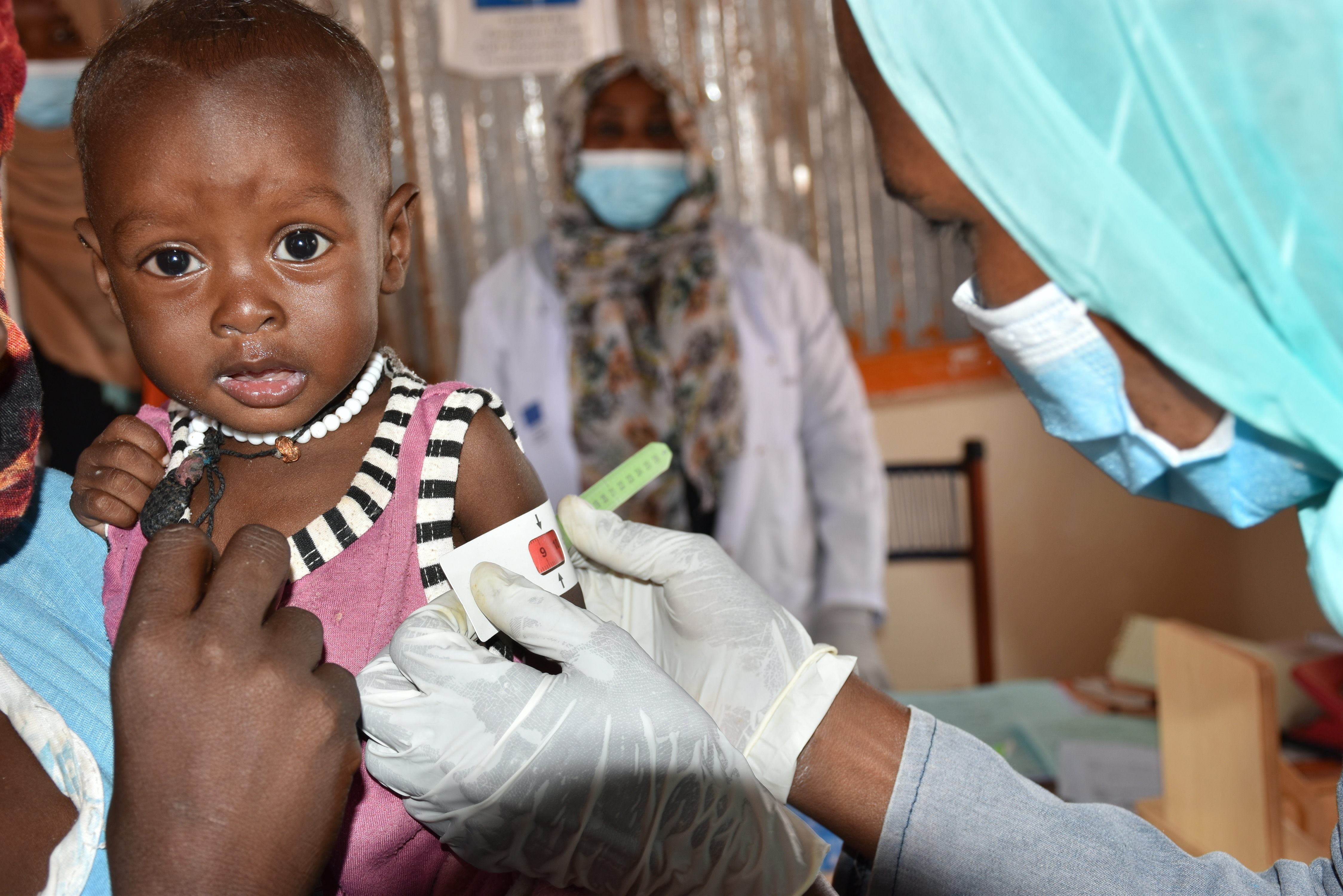 As households struggle to find food,

children are bearing the brunt.

In 2020, Sudan saw five major shocks: COVID-19 and its impact, locusts, floods, intercommunal tension and conflict, and the influx of refugees from neighbouring Ethiopia.

The humanitarian situation throughout Sudan has continued to deepen in 2021. In fact, there has been a nearly 45% increase in the number of people who are vulnerable, according to the humanitarian needs analysis conducted in December of 2020.

As such, the most vulnerable people like displaced people are becoming even more vulnerable. Of the 13.4 million people in need, 7.3 million need emergency assistance for life-threatening needs, and nearly half of these are children (Sudan Humanitarian Needs Overview 2021).

As households struggle to access food, children are bearing the brunt. At the Otash Outpatient Therapeutic Programme (OTP) section, nutrition officers are busy screening children with severe cases of malnutrition. Some are admitted for the first time, while others are visiting for follow ups and replenishing Plumpy Nut.

When 16 months old Naima was first brought in a few weeks ago, she was extremely underweight. Nutrition officers said just from observing that she was underweight; there was no need to even weigh her. During our visit, officers said her weight had slightly improved to 4.8 kilograms, and she was continuing with her rehabilitation. Naima’s mother, Mariam, had brought her child for routine monitoring and to pick sachets of Plumpy Nut.

Mariam Hamed sat sombre at the OTP, craddling her 12 months old son Mohaned in her arms; he was weighing only 6 kilograms. Mohaned was irritable, would cry at times, and did not want to feed on the PlumpyNut paste. His eyes were pale and alert, his hair a light brown, and his skin around the neck area was also wrinkled. Nutritionists also identified these as signs of malnutrition and lack of proper nutrients.

In July, nutrition officers recorded 40 cases of Severe Acute Malnutrition (SAM) in children under five. 130 cases of Moderate Acute Malnutrition were also recorded, 22 of who were pregnant and lactating women. In 2021, 208 SAM cases were admitted and undergone or undergoing rehabilitation, while of the children screened, 20 were found to be normal.

Nutrition officers and volunteers attribute the children’s malnutrition to food unavailability. “It has worsened for a lot of households during the lean season (May- October),” says Fatma Fudheil, nutrition officer seconded from State Ministry of Health.

The deepening food insecurity is further amplified by the enduring effects of inflation, which has seen the prices of goods increasingly go high.

Data from the Market-Based Food Security Monitoring (MBFSM) report for South Darfur, covering the period July 2020 to July 2021, reveal the ripple effects of inflation on consumers.

For example, a kilogram of sugar which is arguably the most used commodity in every Sudanese household costs 350 SDGs when compared to 120 SDGs during the same period last year. Similarly, the prices of millet and sorghum which are commonly used to make ‘asida’ a staple food for most Sudanese households have increased a hundred-fold.

Tomatoes for a family of six per day as of July cost 685 SDGs, an increase from 150 SDGs in January 2021, while vegetable oil per litre now retails at 1,362 SDGs when compared to 415 SDGs in the same period last year.

Conflict, too, has driven people out of their homes, further worsening their ability to access food. Most of the mothers who had visited the OTP had recently arrived in Otash camp, having been displaced from different parts of Darfur including East Jebel Marra and Al Geneina in West Darfur.

Afaf AlNasir had visited the Targeted Supplementary Feeding Programme in Otash clinic, where she received ‘PlumpyDoz', a nutritious supplement to be given to her daughter, Hanan. Although Hanan was not visibly malnourished, nutrion officers say she could be at risk of malnutrition. According to nutrition officer Rasha Ismail Fadeel, ‘PlumpyDoz is given to ‘normal’ children between 6 and 24 months to prevent malnutrition, where the threat is high.

Afaf fled Al Geneina arrived in Otash IDP (Internally Displaced People) camp five months ago. Tens of thousands have fled their homes in the last six months and sought safety and assistance at Otash. She feared her child risked becoming malnourished, if the food situation did not improve.

As she awaited registration and verification, she picked jobs in town mostly doing domestic chores, which earned her some 300 SDGs a day. “It’s tough here because we don’t receive assistance yet, but going back home now is not an option,” Afaf said.

World Vision is running the OTP and TFSP as part of its interventions in addressing malnutrition in children, pregnant and lactating women, funded by UNICEF and World Food Programme (WFP), respectively. Other health interventions at the clinic are funded by EU Civil Protection and Humanitarian Aid (ECHO).

The IDPs have access to water, sanitation and hygiene services, albeit they are under strain now, as number of users increase.

In partnership with WFP, World Vision is also providing food and cash-based assistance. In July, 31,000 IDPs in the camp which is home to about 80,000 IDPs received cash.

According to Mashingaidze, Food and Cash Assistance manager, South Darfur programme, 157,000 internally displaced persons across three camps in South Darfur received cash assistance in July 2021, with a household of five receiving US$22. “Beneficiaries can buy whatever is affordable with the cash,” says Mashingaidze.

World Vision is on the ground and responding.